Seattle, a city nestled between Puget Sound and the astonishing lake Washington, finds its home in the northwest side of the northwest region of the United States. Living in the Emerald City comes with many perks: Access to great state and national parks, seafood, a thriving music culture, a highly educated community, and no shortage of water from all the rain they get. However, when most people think of the emerging tech markets in the United States, they think often of San Francisco and New York rather than another truly emergent powerhouse, Seattle.

The main hub of the Pacific Northwest also is seeking to maintain its identity and culture as it continues to expand at a rate similar to San Francisco. Consider that technology related jobs from 2005 to 2015 grew from 88k to 138k. According to Forbes, Seattle is also the second highest paying city for tech jobs in the nation. Although there are concerns of preserving identity and culture similar to many other growing U.S. cities, Seattle is unique in its desire to always self-define its own niche. When the residents of Seattle want to escape the rain and enjoy that culture, many turn to art.

Art Force today takes a critical look at what some of the major thought leaders on art procurement and collection in corporate offices in Seattle. The city itself has over 10 art-centric museums, numerous artist studios from a wide variety of mediums, a well developed regional orchestra, and many non-profit organizations dedicated to fostering growth of art in Seattle. Did we mention the many prolific music artists who have called Seattle home, including Pearl Jam, Nirvana, Soundgarden, Band of Horses, Odesza, and even Jimi Hendrix. We will also feature commentary on Seattle satellite cities and suburbs, and also will feature writing on Portland, Oregon.

The company which pioneered commercial and personal computer software and a standardized computer user interface has grown at such a rate that there are now more Windows PC’s on the market than car. Microsoft is most widely known for their operating systems which were developed with IBM in the mid 80’s, which at one point had around 90 percent market share in personal computers. However, in the time it took them to grow into one of the most successful tech companies ever, they’ve invested heavily in Innovative art to match. We can observe clear communication that to Microsoft art is a reflection of management’s investment toward the development and professional growth of their employees.

What started as a collection of computer engineers in New Mexico has become a multinational corporation which has invested in almost 5,000 pieces artwork spanning 180 buildings across the world.  Their company has now created clear messaging that they would like to continue to feature the art of individuals who create truly imaginative work, often incorporating technology into their production process. They’ve even gone on to include in their facilities an artist in residence program called Studio 99 to facilitate this effort. The aim of this residency is to “introduce artistic perspectives, processes, and values in the work of our organization.”

“There’s a common misconception that art and science are different. f course, there are differences, but the practice of a researcher is very similar to that of an artist. You define your own meaning, you’re defining your own goals for success in terms of what you’re inventing or creating, you evaluate things as you explore them and you start every day thinking how you’re going to innovate in this area. You create your own problems.”

Benefits art in the words of Microsoft:

The most successful businesses flourish because their environment pushes workers to go beyond what is just expected. Corporate art, then, is a tool used by smart business owners who understand exactly how vital the workplace setting is for the business because it is an investment in the employees and their work

How do you start a company which functions to sell books on the internet to being one of the most innovative businesses in E-Commerce and cloud infrastructure. They’ve managed to shape their competencies in very unique ways, such as aggregating products from many different markets into one umbrella brand, and have established a reputation of doing things differently, providing a streamlined buying experience, and reducing the very need for customer support. According to their website, they’ve even found a way to make their urban Seattle campus buildings work on… wait for it… Recycled heat called “district heat”. On the topic of innovation, The CEO Jeff Bezo’s even founded a Center for Innovation on the ground floor of the Seattle Museum of History and Industry”.

With such large corporate facilities such as 11 corporate buildings in Seattle and growing, we at Art Force were curious about the extent with which the company invests in interior design and art. Amazon was tasked with the opportunity to really create an interior brand over a little over a decade during their explosive growth. Although the buildings don’t appear to be the same, the imagery they incorporate seem to articulate the same brand associations most of us have with Amazon. Those associations are high energy, high production, and even that even a sense of mystery. It’s as if the facilities of Amazon were curated to be both accessible, make their production seem larger than life. Consider that in Phoenix, one of their fulfillment centes has a graphic which says “work hard. have fun. Make history.”

When people become overly comfortable with a work structure, they cease to innovate in the same manner when they were a fit and trim organization. So along came WeWork in 2010 to design intricate communal workspaces under the vision that people work better collectively. Their month-to-month contracts for desk or office space for growing businesses also features innovative art to feed the entrepreneurial spirit. Many of the pieces that they put up, whether it be commissioned wall mural art, framed, or interior design based work all feature a local roots to help in fostering community in an innovative work setting. 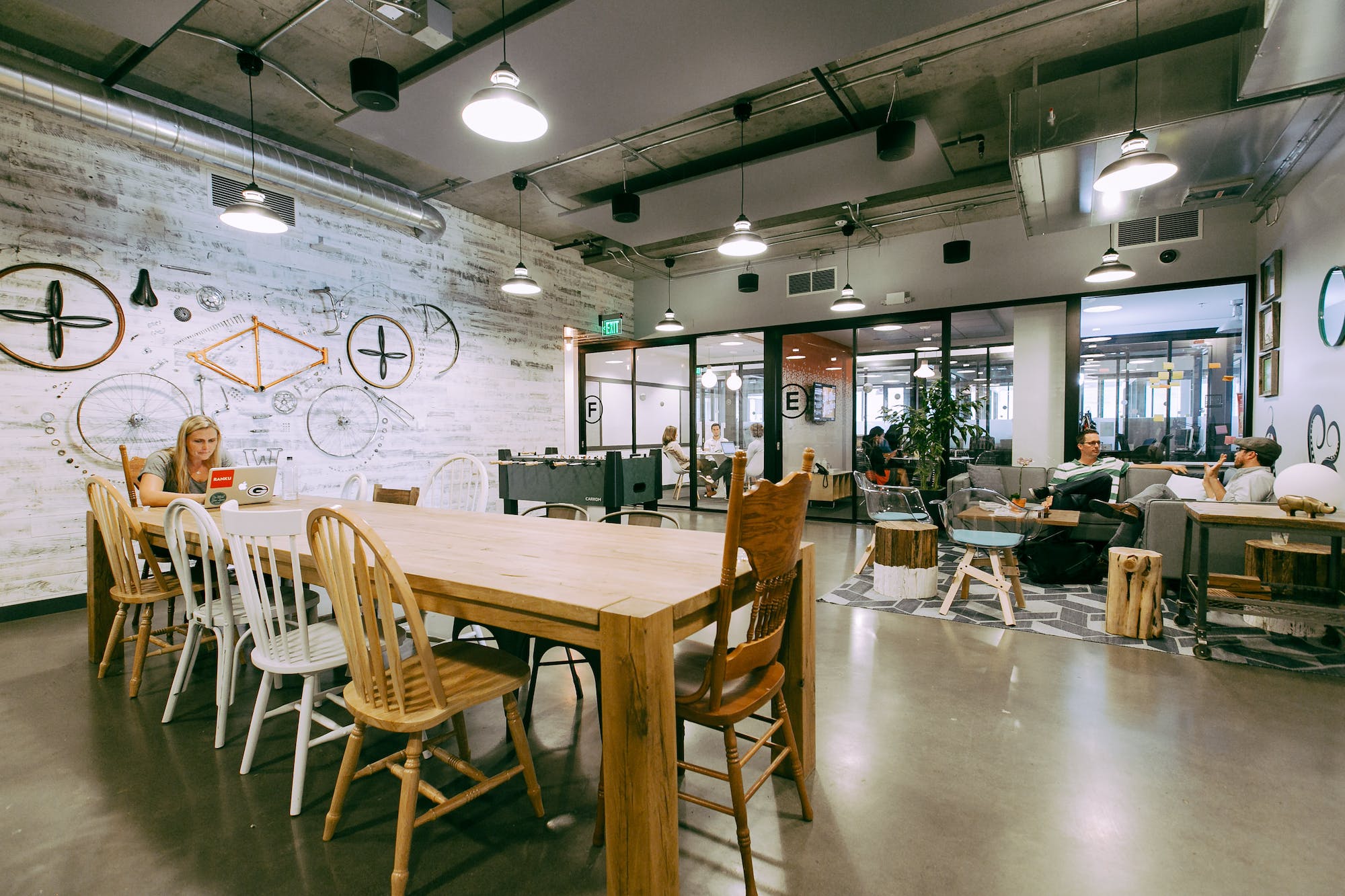 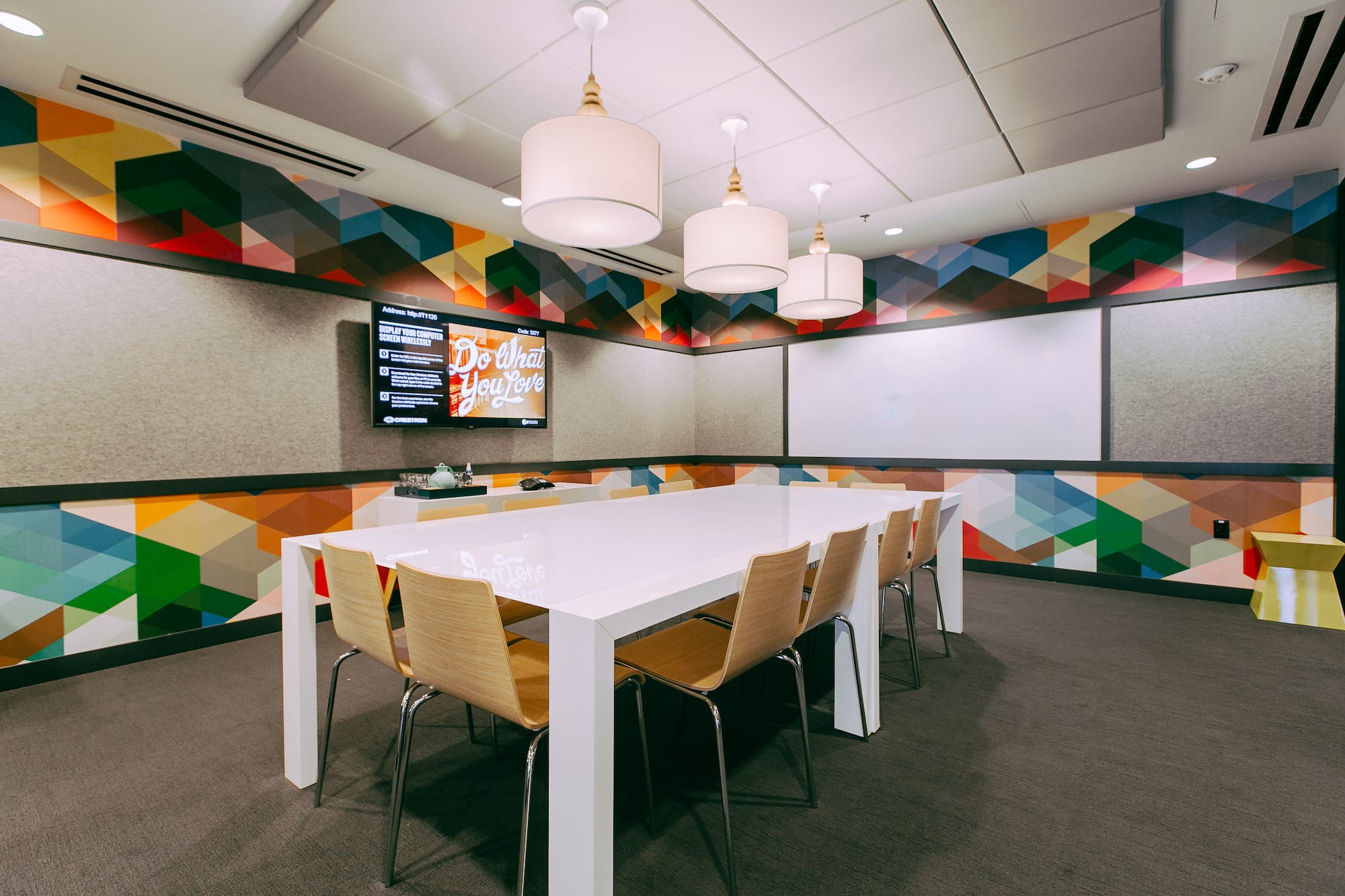 Are you in the market for buying or selling of online performance advertising? If that is the case, Media Alpha has developed an Innovative platform for an online marketing engine which gives real-time analytics for the best possible media. Their offices feature unique art and wall graphics that give the company a lean and modern startup feel.

Although Pandora is a company headquartered in Oakland, California, they are one of many growing tech-based companies that are finding the need to establish offices in Seattle a pressing choice. Being a transplant company doesn’t mean this company hasn’t grasped the aesthetic which makes Seattle great though. As depicted below, their designs feature art which is both earthy and yet modern with tech-related installations and graphics.

Although headquarters can be the cultural prototype for the rest of corporate offices throughout the globe, so to can each one take on a sense of individuality. This is the case with the Portland office of Icebreaker, a private clothing manufacture based out of Auckland, New Zealand. Visitors of this U.S. office will notice the clear trend of either nature or wildlife artwork installations. This company even has a picnic bench to match in the middle of their offices. While their employees engage in the design, manufacturing, and sale of outdoor apparel, their surroundings reinforce the mission and the brand. That is called Brand synergy folks.

We can give a strong Art-Nod in the direction of Design and Ad Agencies since, who consistently show elements of art across all areas of their business model. Parliament Design, coming straight from Portland, Oregon focuses these design efforts on brands focused in “surf, hook and bullet, things with wheels, form+function and the great outdoors.” When you next ask the classic question of “what sort of environment people put themselves in to create the most creative and inspired work”, perhaps we should look to the innovation leaders of design groups in order to get a satisfactory answer for this. Many such companies choose to feature their own most inspiring work as a measure to prove what is possible during past projects under certain constraints.