New York is a city unrivaled in cultural diversity and expression. We look to the enterprise capital of our nation for many insights into design and business trends alike. Through our research at Art Force, it’s apparent that there are many different stances a company can take in order to fill its walls and communicate great things. Some of them collect actively, seeking out up-incoming artists, and displaying them for potential clients. Others use the tools of the company’s interface to crowd source art in order serve as a reminder of their brand and mission.

New York is clearly open for business with the most fortune 500 companies out of any other region in the United States, (55 in the state, in case you were wondering). For many of us who have only visited, their business environment gives off an aura of aged, calculated, yet delightly innovative decision making. Art in New York doesn’t appear to be about putting it up as a sign of quick returns or wealth, although risk taking in art as well as business is always a feasible option. In that pursuit, many of the companies we’ve sourced as interesting art enthusiasts choose to form art and interior design as one unit within their facilities. Art is a staple of everyday work, and a reminder of what’s possible.

All the same we acknowledge that some business leaders are skeptical of other decisions to invest in art. It’s especially true when we consider that the ROI on a landscape isn’t as straightforward as launching a new product or making an advertising decision. Yet, art connects us at an emotional and social level, which can’t be seen on paper, but it can permeate our work environment. Forward thinking company strategists know that clients can be waiting in your lobby or near smaller offices and be completely desensitized in a lackluster environment, certain companies could have acres of blank walls if they didn’t invest in themselves. Nonetheless, collections or even individual pieces should be tailored to the organization’s unique business model and vision, allowing them to let their walls speak.

Who has the Biggest in the Big Apple? For anyone who has never heard of the JP Morgan Chase Art Collection, the first thing you should know is that not only did they set the trend of companies choosing to acquire and grow a corporate art collection, but they set the golden standard in achieving unrivaled growth in size and value. It was originally started with David Rockefeller, son of John D. Rockefeller Jr. and Abby Aldrich Rockefeller. Unlike certain other innovative collections and office examples we will provide through Art Force, collections like the JP Morgan Chase Collection span not only the corporate offices, but also each of their individual smaller offices. Consider that between 1982 – Present they saw it grow from roughly 5 thousand pieces, to approximately 36 thousand pieces among 450 offices. The size has increased at such a rate because of a mixture of organic acquisition as well as mergers, most notably that of the Chicago-based Bank One.

Not only has it amassed great volume but it has also a longstanding track record of philanthropic initiatives. They’ve extended certain values of philanthropy from the JP Morgan Company. Examples of this include a $1 million donation to the Columbus Museum of Art, donating 22 pieces of art to the Columbus museum of art, as well as donating 22 pieces of art  toward the Utah Arts Council for the State Art Collection. Additionally, the Chase company has stated publicly their intent has been to “purchase museum-quality art by younger emerging artists and artists in mid-career – not at the top of the art market,” – Stacey Gershon, previous senior curator at JP Morgan. The company has, however, a small number of notable artists have been collected, including “Josef Albers, Romare Bearden, Amy Cutler, Roy Lichtenstein, Joan Mitchell, Vik Muniz, Markus Raetz, Faith Ringgold, Cindy Sherman, and Andy Warhol.”

Which other companies are known for collecting?

The Gap was first started in 1969, under the name  “the Generation Gap” . Though this occurred in San Francisco, California, the same place as their corporate headquarters, the multinational corporation has chosen New York as the central hub for their design and creative headquarters. Fourty-seven years later, the company  now oversees conglomerate divisions such as Old Navy, Banana Republic, Athlleta, Intermix, and the Gap brand, realizing annual revenues of of over Sixteen Billion dollars. The two founders, Don and Doris Fisher have been very relevant figures in the community of corporate art enthusiasts. They managed to create an immense contemporary art collection. Yet, they believed their collection should be viewed publicly and after some time, donated all of their collection to the San Francisco Museum of Modern Art (for a period of 100 Years) .

Retailers today know that corporate identity goes beyond their product and the point of purchase, meaning that brands can be utilized in omni-channel communications to consumers. The Gap did just that in 2014 for a surprising move to partner with the Frieze art fair, hosting two outdoor experience boutiques, and a space to sell T-Shirts designed by notable artists such as Alex Katz, Yoko Ono, Richard Phillips, Ugo Rondinone, Peter Lindbergh, Francois Berthoud and Roe Ethridge. Their EVP of Global design stated on the event that “Gap is moving collaborations forward and allowing people to access contemporary art in a different way.”

What truly makes the Gap innovative in their New York offices in particular is that with every picture or article written on Gap’s office culture, you get sheer minimalism but a clear pictorial inspiration of the American dream. Their offices work in an attempt to blend product and artistic imagery to allow employees to have a deeper understanding of the Gap brand. Decals are strategically placed that say such things as “Inspire, we have a magnetic point of view that inspires individuals to come together with bold, meaningful experiences that sometimes even start movements.” or even “We are conduits of creative culture.” Corporate office imagery can serve a multitude of different functions, and in the case of the Gap, they take their brand and let the walls yell it out.

What of those smaller offices we came here for?

Tumblr is a Yahoo owned Microblogging site that allows users to make posts of text, photos, and other content of things that inspire them or which they would like to express digitally. It has one-part appeal in social – networking, and one-part blogging site. When executives that oversee the Tumblr company decided how they want their walls to reflect their company’s mission, they decided with one of the most intuitive ways imaginable: to frame, hang, and put-up the content of  their ever-creative users. It’s even said that they have a bookshelf with published versions of blogs that got their start on the site! Publicly displaying their user’s work shows that they have an understanding that sites such as their own thrive solely on the content generated by users and their ability to be inspired by one another. In that way, Tumblr encapsulates a channel of communication between user and their website architects. Brooklyn based Kickstarter HQ is no stranger to the arts either. Their mission is to help “artists, musicians, filmmakers, designers, and other creators find the resources and support they need to make their ideas a reality”. We can assume that the company’s Co-Founder and CEO Yancey Strickler decision to purchase an old pencil-factory with a small staff was in the hopes of creating a living embodiment of elevation culture they produce on their site. He is quoted as saying “We picture it being a hub for different communities to showcase their projects.” The space that functions as an art gallery has been created within their facilities in the hopes of making portions of the facility as publicly accessible as possible. The Kickstarter way, in much the same way as with Tumblr, is to try to take user generated ideas, and bring them to life. Their offices even feature a gallery to host public exhibitions.

Fab is a online site to curate products ranging from accessories, clothing, and tech, in order to only provide eye-catching and unique purchases. Their offices demonstrate an equal eye-catching color-centric aesthetic. Many of their offices are brand centric, with the Fab logo prominently displayed throughout,yet at the same time either being a wide array of bright colors, or choosing to make an entire meeting room one singular color. The decor of their Manhattan office articulates the vital need for energy we can infer their company seeks from employees.  Chief Creative Officer of the company has been quoted as saying “it can feel chaotic, but we like that.” 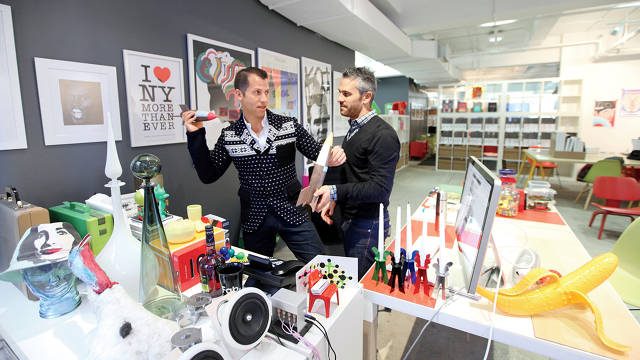